Hagi, where the Meiji Restoration Started 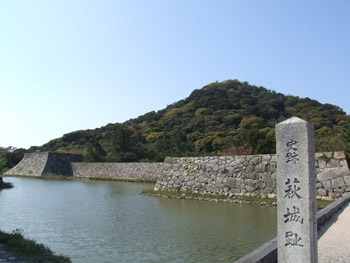 Hagi is located in the northern part of Yamaguchi Prefecture facing the Sea of Japan and surrounded by mountains on three sides. The central area developed on the delta area formed by the Hashimoto and Matsumoto rivers which branch off from the pristine Abu River and is a town where the atmosphere of a typical Edo-period (1603-1868) castle town still remains. Hagi first appeared in Japanese historical records in 1604, when a feudal lord named Mori built Hagi Castle at the foot of Mt. Shizuki and the town was developed around the castle by the Hagi Clan. At the end of the Edo period, the famous Meiji Restoration vanguards; Shoin Yoshida, Shinsaku Takasugi, Gensui Kusaka, Takayoshi Kido, and Hirobumi Ito all hailed from Hagi, so this city gained popularity for tourists as an epoch-making city for the Meiji Restoration. 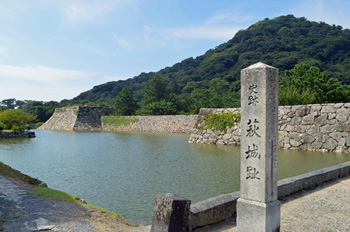 Hagi Castle was built by a feudal lord, Terumoto Mori, in 1604. It consisted of the Honmaru (castle tower), Ninomaru (second bailey), Sannomaru (outer part of the castle) and Tsumemaru (castle on the mountain). In 1874, all the buildings such as the donjon or watchtower were destroyed and now only a part of stone walls remains. Today, this well-preserved castle ruin is a well-known place for beautiful cherry blossom viewing. About 600 trees of Somei Yoshino (a variety of cherry tree) and Midori Yoshino (a unique variety of cherry which is designated as Natural Monument of the prefecture) bloom gorgeously in spring. In 2015, it was designated on the World Heritage List as a part of the Site of Japan’s Meiji Industrial Revolution. 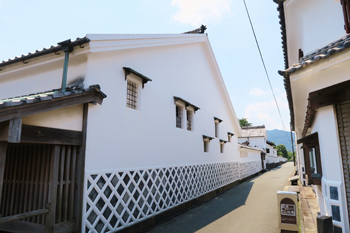 The area which developed as a castle town around Hagi Castle has been designated as a National Historic Site. The streets were set out neatly in a grid pattern and old samurai residences and machiya (traditional house) stood in rows, the remains of which are now a relic of olden times. There are some narrow streets called Kikuya Yokocho Street, Iseya Yokocho Street, and Edoya Yokocho Street. In these streets, there are some famous tourist attractions such as a wealthy merchant Kikuya Family Residence, the birthplace of Shinsaku Takasugi, old residences of Takayoshi Kido and Shusuke Aoki, warehouses, gates, and stone walls of Namakokabe (wall covered with square tiles jointed with raised plaster). In 2015, it was designated on the World Heritage List a part of the Site of Japan’s Meiji Industrial Revolution. 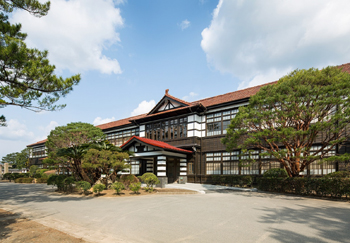 Meirin School was one of the largest schools run by the Tokugawa government in the Edo period. It played an important role in the people of Hagi’s education. The building, which was designated as a cultural property, was renovated and reopened as a new cultural and tourist attraction of Hagi in recent years. There is a tourist information center, gift shop, and a restaurant which serves dishes using specialties of Hagi in the main building. In the Second Building (admission fee required), the World Heritage Visitor Center, Geo Park Visitor Center and the Bakumatsu Museum which displays scientific technology developed at the end of Edo period are open. Shokason Juku was a private school of politics at the end of the Edo period housed in a 50-square meter wooden one-storied small house with a tiled roof. It consists of two Japanese-style rooms with 8 tatami mats and 10.5 mats. It is designated as a National Historic Site. In 1857, 28-year-old Shoin Yoshida took over the school from his uncle and opened his private school of politics. He accepted any students who wished to learn regardless of social class. He taught here for only about one year but raised many famous and important historical figures such as Genzui Kusaka, Shinsaku Takasugi, Hirobumi Ito, Aritomo Yamagata, Akiyoshi Yamada, and Yajiro Shinagawa, who served as a driving force of the Meiji Restoration and played an important role to start the new Meiji government. In July 2015, it was designated on the World Heritage List as a Site of Japan’s Meiji Industrial Revolution. 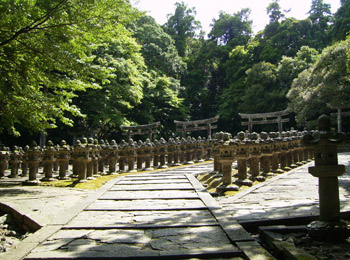 Daisho-in Temple is a Rinzai Sect temple designated as an Important Cultural Property. It was formerly a family temple of the domain lord of Hagi. The Kuri, or temple’s main kitchen is large and its appearance is suitable to serve as the family temple of the domain lord. The tombstone of Hidenari Mori, the first lord who ruled this area, can be found here as well the graves of other successive lords of the Mori Clan, from the second generation to the 12th generation, along with their wives’ graves. In front of the graves are approximately 600 stone lanterns donated by local feudal lords. 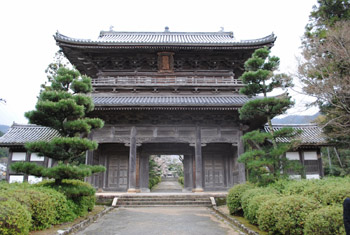 Toko-ji Temple is one of the greatest temples of the Obaku Sect. It was built by the third-generation local lord, Yoshinari Mori in 1691 and is a family temple along with Daisho-in Temple. So-mon Gate (main gate), San-mon gate (temple gate), a large bell, and Daiyuho-den Hall are all designated as Important Cultural Properties. The large graveyard belonging to this temple, at the back side of the Main hall, is designated as a National Historic Site. In the graveyard, there are some tombstones of the former local lords and their wives. In front, are approximately 500 stone lanterns contributed by the local feudal lords. Various kinds of Hina Dolls (traditional doll set for the girl’s celebration in March) are exhibited. On the last two days of the festival, Nagashi-bina (floating Hina Dolls on the river) event is scheduled. 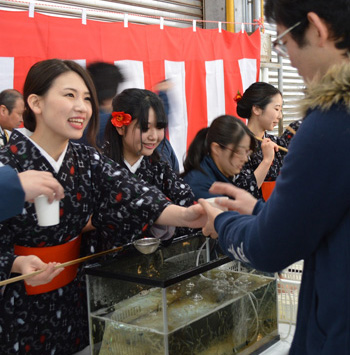 The best seasonal product of Hagi in this season is ice fish (Shiro-uo) which is recognized as a symbol of arrival of spring. In particular, eating live ice fish is a must-try. 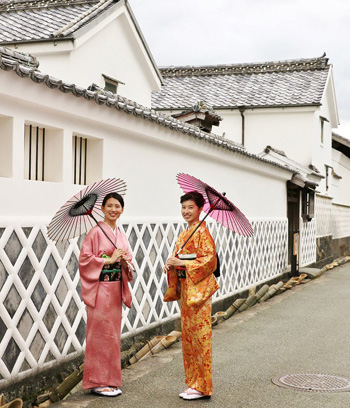 An event in which people can enjoy wearing kimono and strolling around Hagi City. People who wear kimono can receive a special privilege in some shops or presented with their self-portrait photographs. This is an annual event where people can experience tea ceremony culture and the local Hagi ceramics. It is held at the remains of Hagi Castle, Shigetsu Park and other locations during Golden Week (from end of April to the first week of May). A large-scale market of Hagi Ceramics with 400 years of history. Many visitors come to buy Hagi pottery or products of Hagi. Also, people can experience trying to make pottery on a wheel. This is a summertime dream with beautiful fireworks at Kikugahama Beach, the best location along the Japan Sea’s coast! This is a big summer event in Hagi. Many events are held such as the traditional Sumiyoshi Mikoshi parade (portable shrine) or the Ofunauta traditional ceremony (designated a prefectural intangible folk cultural asset) and so on. This is a festival featuring fish. People can buy fresh seafood caught around Hagi. Children can enjoy “scooping fish”. This is an autumn big event in Hagi. The Daimyo parade goes around the city. This traditional event has continued for about 300 years. 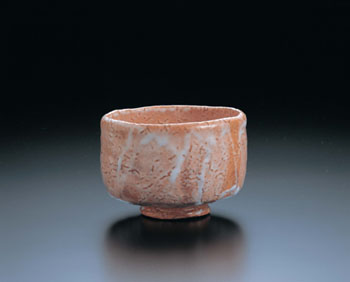 “First, Raku, second Hagi, third Karatsu.” As this old saying goes, Hagi-yaki Pottery with its simple shape and decoration has been valued and praised by many tea ceremony masters. With its absorbent property, the color slightly and gradually changes after being used for a long time. This phenomenon is called “Seven Transformations of Hagi Ceramic” and is highly valued. 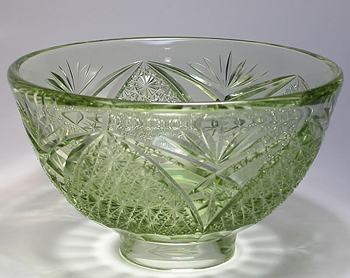 The moss green color and the cracked-looking patterns on the surface like Hagi Ceramics are typical characteristics of Hagi Glass. Hagi Glass is harder and more durable than common glass since it is refined from raw stones of basalt rocks excavated on Mt. Kasayama in Hagi. Yamaguchi Prefecture is one of the top ranked prefectures covered by bamboo forests. Around Hagi City is a famous production area since the city has approximately 2000 ha of bamboo forest. The temperature difference of this area is quite extreme which results in bamboo growing strong and thus Hagi products are made of good quality bamboo. Setsuki Aji, a kind of jack mackerel, grows well by eating good and nutritious food and they become very fatty and firm-textured. Fresh Setsuki Aji are caught every day in the sea around Hagi. With the beautiful pale pink color, Amadai tilefish is one of the best fish of the Japan Sea. Since Hagi has a good fishing point for Amadai, and visitors can enjoy high-quality fish as sashimi. This is a unique local dish, and nothing similar can be found in other regions. Through four seasons, it is indispensable dish in this region for ceremonial occasions and banquets. Natsu Mikan (Chinese Citron) is a summer fruit with a sour and refreshing taste. It is often used for juice, jelly, confectionery and even ice cream which is very popular. Mainly from April to December, swordtip squids (Kensaki Ika) are caught by pole and line fishery in the area along the coast of Yamaguchi Prefecture to offshore of Hagi. They also have another name; “Queen Squid”. Try them with sashimi or tempura. This is one of the most popular Hagi products which has been produced continuously from the era of the first feudal lord of the region, Hidenari Mori. The cooking method called Yakinuki (baked on a low heat from the bottom) is a feature of making this product. Yamaguchi Prefecture is the best prefecture to enjoy Hagi pufferfish, or Mafugu. The fish meat has a vivid amber color, tender texture and delicious taste. Torafugu is “King of pufferfish” and Mafugu is “Queen of pufferfish”. Sengokudai, a plateau in Hagi City, has fertile andosol and a cool climate at its 400-500 meters high altitude. Thanks to this geographical advantage, Sengokudai is the biggest place of production for white radish. The radish is brought up with great care by farmers and is highly valued because of its freshness and sweetness. Kintaro is another name for goatfish which has been familiar with local people since a long time ago. The soft white fish meat with a rich and sweet flavor has a superior taste to king size white fish. It is suited to various cooking styles.