Aki, the City of History and Culture 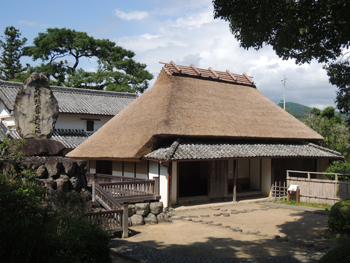 Aki City, in eastern Kochi Prefecture, is home to a number of historical artifacts such as Nora Dokei clock tower, old site of Aki Castle, classical samurai residences from the Edo period, and more. The city is the hometown of Yataro Iwasaki, the founder of the Mitsubishi Group whose childhood house still stands. Uchiharano Park will be full of azalea flowers (16,000 shrubs) in spring. Ioki Cave where a many variety of ferns inhabit is mysterious. One key event that has made Aki famous throughout Japan is the fact that they host the annual pre-season camp of the Japanese professional baseball team, the Hanshin Tigers. A number of Tigers fan visit Aki during the camp from all around Japan. 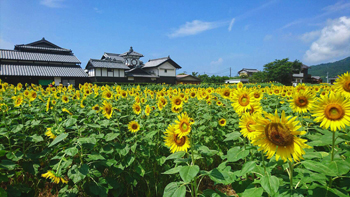 The land proprietor of the area, Genma Hatakenaka, built this clock tower around 1887. He was so fascinated by the workings of clocks that he took apart American octagonal clocks and put them back together again by himself repeatedly. As he came to understand their structure, he tried to build this large clock alone, from making the weights, toothed wheels, and every component himself. 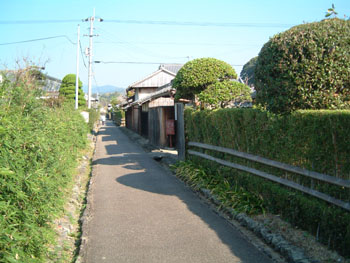 Dignified classical samurai residences surrounded by bamboo fences and tidy hedges from the Edo period are located in this district which was designated as a Preservation District of Historic Buildings in July, 2012. A fine park on the hill with a superb view of the Pacific Ocean which was maintained by the 5th master of the Goto Family as his leisure park. From spring to early summer, a variety of flowers adorn the park such as cherry blossom, azaleas and irises. The view of the 16,000 azalea trees reaching full bloom is just stunning. An Azalea Festival will be held around this time and many visitors come to enjoy their beauty as well as some cultural experiences at the Uchiharano Ceramic Museum and Uchiharano Glass Studio.

Access 10-min. by car or 25-min. by bicycle from Aki Station on the Gomennahari Line Some structures of the castle remains such as well, moat, and stone walls. 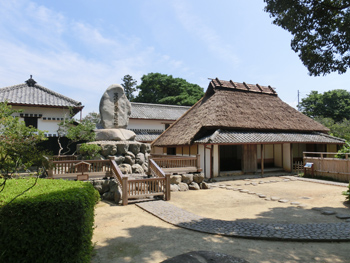 The house was relocated to its present location by the great-grand father of Yataro Iwasaki (the founder of the Mitsubishi Group). This is a typical architectural example of a middle-class farmer’s house. The Oni-gawara roof tile has the family crest of the Iwasaki Family which is said to have been the origin of the logo of today’s Mitsubishi Group. It is said that the young Yataro designed stones in the garden grounds; he allocated stones following the map of Japan hoping he would become a successful businessman who could make an impact on the entire country.

Access 10-min. by car or 20-min. by bicycle from Aki Station on the Gomennahari Line 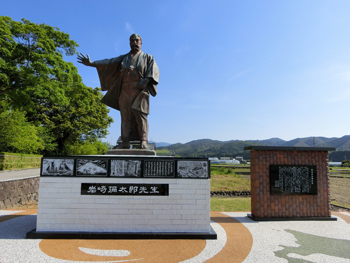 A statue of Yataro Iwasaki was established in Enokawakami Park in 1986 celebrating the 150th anniversary since his birth. The bronze statue is 3.3 meters tall. On the base of the statue is 16 engraved items related to Iwasaki.

Access 10-min. by car or 10-min. by bicycle from Aki Station on the Gomennahari Line Ryutaro Hirota is a children’s song composer who was born in Aki City. To remember his merits, 10 song monuments dedicated to Hirota are set around the city such as at Oyama Cape, Uchiharano, the Birth House of Yataro Iwasaki, etc.

Access 10-min. by car or 20-min. by bicycle from Aki Station on the Gomennahari Line

Traditional Japanese calligraphy was popular in Aki City since the Edo Period. The city produces many famous calligraphers even today. There are calligraphy monuments in the Enokawakami Park.
At the History and Folk Museum, a calligraphy which is said to have been written by Yataro Iwasaki, the founder of the Mitsubishi Group, in his teenage, is displayed (the replica is exhibited at Aki Tourist Information Center). Ioki Cave is a natural cave made by denudation of waves from the Pacific Ocean. Clustered fern plants (Natural Monument) create mysterious scenery and attract tourists. About 16,000 azalea trees reach full bloom in the park.

First Saturday and Sunday of August
In Aki City Naruko Dance parade on the first day and dance competition and other events on the second day. The finale of the festival is the gorgeous 4000 fireworks show. 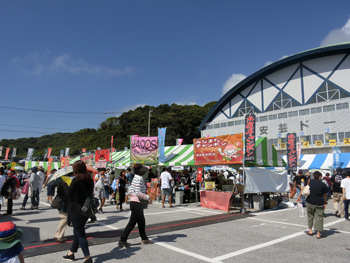 A variety of local specialties from the eastern part of Kochi Prefecture and other areas come together. 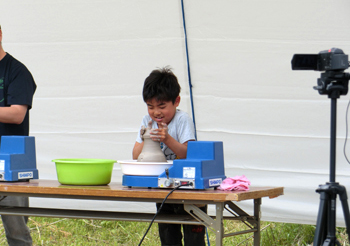 Exhibition and sale of ceramic works, fun stage events, pottery experience and more. It’s an event where everyone can have fun together. 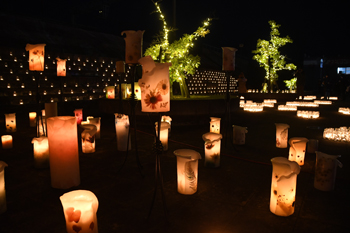 A candle event celebrating the birthday of Yataro Iwasaki, the founder of the Mitsubishi Group.

Runners simply enjoy running the full marathon at their pace. 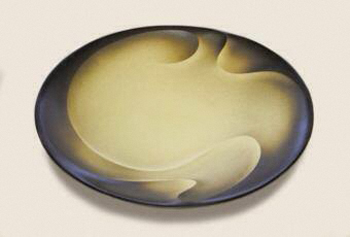 The first kiln producing Uchiharano ceramics was opened around 1829. Many people are fond of the simple and warm texture of Uchiharano ceramic pieces such as bowls and vases. At the Uchiharano Ceramic Museum, visitors can try making pottery as well as glass craft in the nearby Glass Studio.

Around 1700, a roof tile craftsman named Hanbei was invited from Kikugahama in Iyo Province (present-day Kikuma Town of Ehime Prefecture) in order to produce good roof tiles in Aki. The fields around Aki were blessed with good clay and this helped the Aki Roof Tile industry flourish around the time the 5th Goto Family master was governing the area. 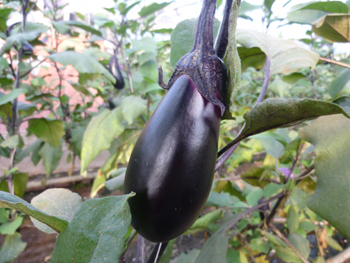 Sweet potato in a long stick shape are deep fried and coated with sugar. Tosa Jiro is a hybrid of the Tosa Chicken from Kochi Prefecture and American chicken. This free-range chicken produces quality eggs whose color is deep and nutritious. Yuzu is a Japanese citrus fruit grown in the mountain area of Aki City. Refreshing aroma and slightly sweet sour taste adds an accent to juice and condiments. Ice cream made from locally grown vegetables free of or using minimal chemicals and no food additives. Tosa-ben dialect explains the taste of the ice cream on the package. Nyugauchi radish has a less spicy taste and a silky texture. It is grown in the Nyugauchi area, about 30 minutes to the north by car from Aki City. Offshore of Aki City is a good fishing point for Shirasu (white bait). Pile of caught white bait are dried along the sea which is a typical scenery of the city. Ample of dried white bait is topped on warm rice with savory relishes such as seaweed, grated radish, oba leaf, myoga, sesame and more. This is a must-try local specialty of Aki City.