Izushi, a Little Kyoto in Tajima

Izushi is a place where historical townscapes still blend in harmoniously with the modern buildings. Strolling around the town allows visitors to discover various historical charms, such as the Izushi Castle ruins, here and there. Other historical charms are: Shugo-dera local temples dotted around in the old district, machiya traditional houses where people still live, the Oryu Lantern which was built on the remnants of an old boat deck and Shinko-ro, a retro tower rebuilt after the former castle gate. Every season has something different to offer in this town. Cherry blossoms and magnolia in spring, maple and ginkgo trees changing color beautifully in autumn. Recommended fieldtrip spots to spend a refreshing time in nature are at the pure stream and Shiraito Waterfall located in Okuyama Valley and the sacred Nan-ja Mon-ja tree at Toku Shrine. 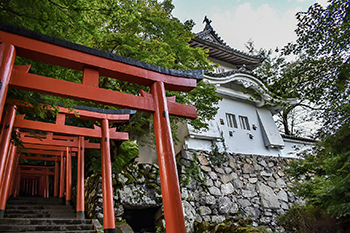 Enjoy the beautiful contrasting scenery between the thirty-seven vermillion tori shrine gates and the castle itself. This is also a popular site to enjoy the spectacular view of cherry blossoms in spring. 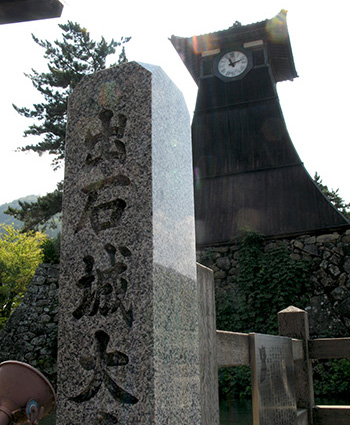 In the early Meiji period, the tower was used for informing people of the time by drumbeat. Now used as a clock tower.

Access A 2-min. walk from Izushi Eigyo-sho Stop on the Zentan Bus

This temple was rebuilt by the priest Takuan, who was said to have invented Takuan, a Japanese pickle made with radish. It is a family temple for successive governors.

Access A 10-min. walk from Takuandera-guchi Stop on the Zentan Bus bound for Izushi

This is a festival in Tajima area welcoming in spring where people pray for success in business and a rich harvest in the following autumn. Many stalls will be set up and some tens of thousands of people come to enjoy the festival. 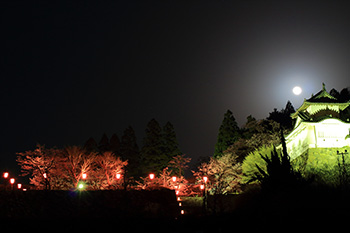 When the cherry blossoms are at their peak, this popular competition of soba buckwheat noodle speed-eating will be held.

May 5
Izushi Shrine in Miyauchi District 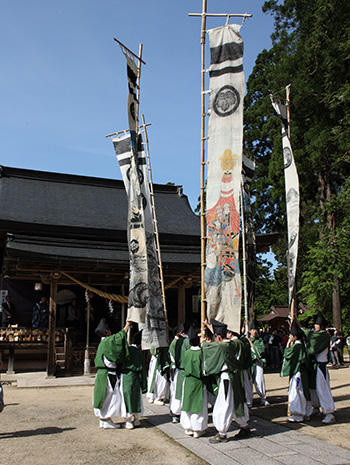 Accompanied by the sound of Take-bora, an instrument made from bamboo, various kinds of Japanese traditional long flags will be swung by participants. This festival is related to the legend of the sun god, Amenohiboko, who was said to have developed the Tajima area.

Fireflies that inhabit the valley are a unique summer time attraction. Their patterns as the fly letting off glimmers of light creates an intriguing scene.

This is a festival to enshrine stone Buddhist images and stone Jizo statues that are scattered around the town. In the old district, known as Yoida-ku, the popular “Roku-jizo” ceremony will be held. 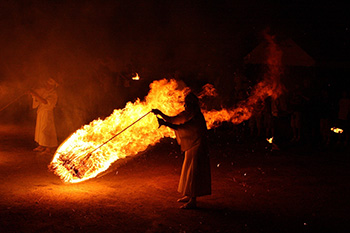 To pray for good health, a huge bunch of straw will be lit and people swing it around. The glimmering light in the darkness creates a mystical scene. 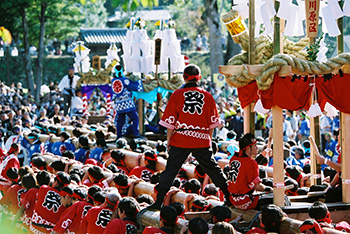 A dynamic spectacle with mikoshi portable shrines clashing into each other is called “Kenka” fighting danjiri, and creates a spectacular scene for visitors. The festival is to pray for a rich harvest. 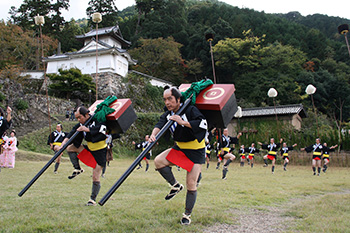 The Daimyo Gyoretsu feudal lord’s procession which recreates the scene of Sankin Kotai from the Edo period will be held. The skillful handling of spears by participants is a must see. 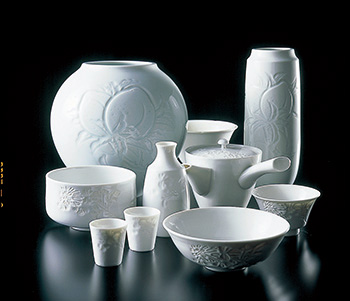 This porcelain has a smooth transparent white as a base color. It has a silk-like tone and delicate sculptured shape produced by an accomplished artisan’s skill.

Izushi Chirimen is regarded as one of Japanese great traditional textiles with elegant patterns and colors and the smooth texture of silk.

A legend recounts that the sun god, Amenohiboko, planted salix, a material which is used for making Kiryu products. In the olden days, Yanagigori, a woven basket, was the top selling line and now bags and folk art products are especially popular. 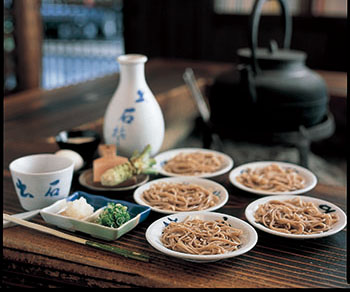 Izushi soba is served on a small Izushi porcelain plate and one portion is served divided into five small plates of soba. “Freshly milled, made by hand and just boiled”; this is the essence of Izushi soba.

Access
From Toyooka Station on the JR Sanin Main Line, take the Zentan Bus for about 30-min. to get to Izushi Eigyo-sho